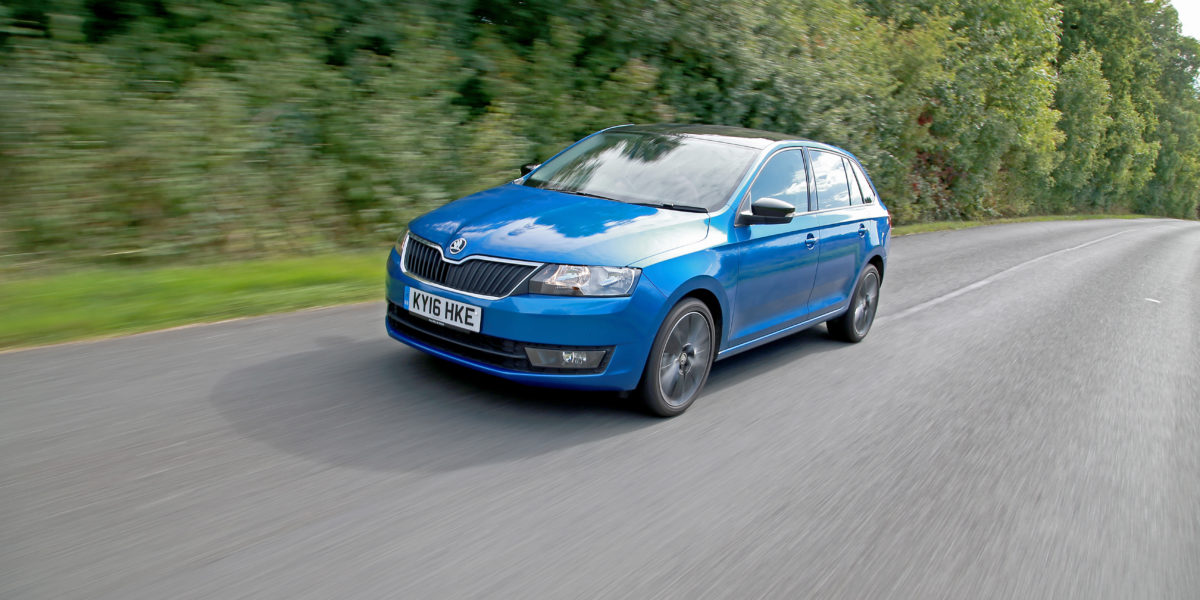 In the December 2016 issue we brought you a review of the Skoda Fabia, an easy car to like for a multitude of reasons. If you need something a size up and you want all of those traits that make Skodas so appealing, the Rapid Spaceback might be more suitable. A more practical version of Skoda’s regular Rapid hatch, the Spaceback features a more upright rear end but a shorter boot, so it’s more compact than the model that sired it. A revised Rapid Spaceback is about to hit showrooms and while we sampled the pre-facelift edition which first went on sale here in 2012, the newer car is little different from the old one. It gets reprofiled bumpers, LED daytime running lights and the option of xenon headlights, while previously the only petrol engine offered was a 1.2 TSI unit. That’s been swapped for a 1.0 TSI powerplant instead, and while we have yet to sample it in the Skoda, we’ve tried it in other VW Group models and can confirm that it offers far more zip and is much more fun to use than you could imagine.

It’s pure Volkswagen Group in here, which means everything is clearly laid out, the materials are high-quality, but the wow factor is conspicuous by its absence. Look closely and things are quite plasticky but it doesn’t look cheap thanks to some clever design.

What matters is that the Spaceback offers usability in spades. It’s a genuine five-seater with ample carrying capacity and a decent amount of cubby hole space. Predictably, a large touch-screen multi-media display dominates the dashboard and it works briliantly with its swiping facility, crystal clear Bluetooth connection and excellent navigation. Our test car came with Skoda’s 1.4-litre three-cylinder diesel engine which is disappointingly raucous when accelerating but it’s not short of go; even at motorway speeds there’s plenty left in reserve. However, it’s claimed to give 79mpg when 55mpg is more realistic. As an overall package we’d opt for one of the much nicer 1.0 TSI petrol engines or if you’re keen to stick with diesel, pay the extra for the four-cylinder 1.6 TDI. Other than that it’s largely good news as the handling is safe and predictable, the car copes well with broken surfaces (better if you’re in one of the front seats), and refinement is excellent, once you’re up to speed. Visibility is good, there’s a conventional handbrake and all of the controls are well weighted. The Spaceback isn’t fun, but it is easy to drive smoothly. Skodas are no longer bargain basement but they do still represent good value; the Rapid Spaceback gives you VW engineering at a lower price. Things kick off with the 94bhp 1.0 TSI S at £14,410; this is the only petrol engine offered, but that’s no problem as it’s zesty, frugal and very enjoyable to use.